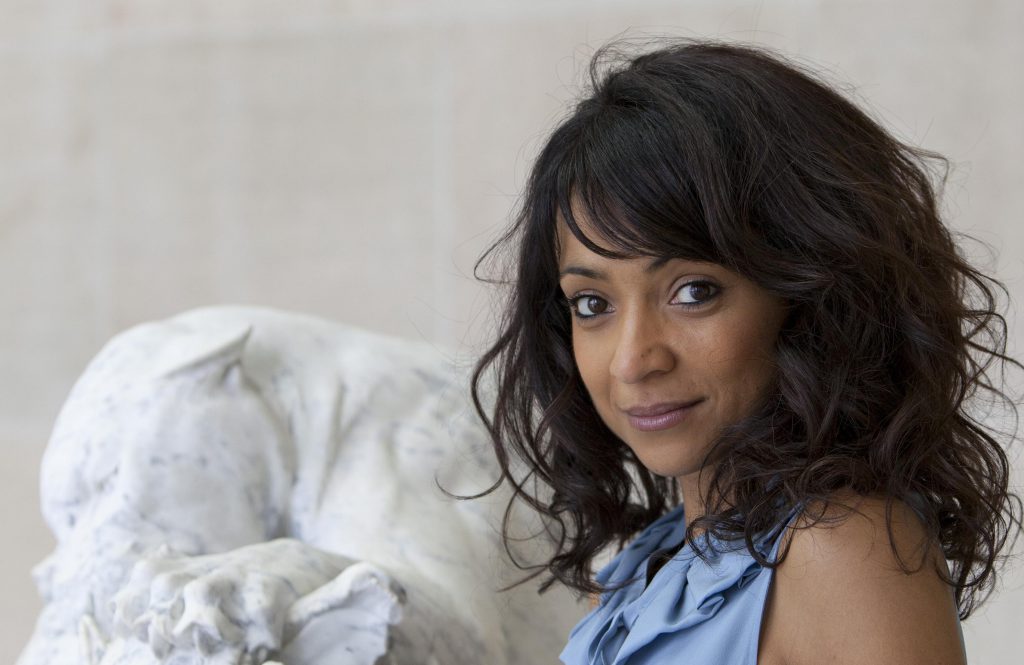 Biographie en français
Click to download a PDF file : The text below or else a shorter version.

Magali Léger began her lyrical studies with Christiane Eda-Pierre. She was subsequently admitted to the Conservatoire National Supérieur de Musique de Paris, where she also worked with Christiane Patard. In 1999, she was unanimously awarded first prize at the institute and applauded by the jury. Thus began a career where not only her vocal qualities were celebrated, but also the ease with which she performed, testament to firm foundations in dance and drama.

In 2003 she was nominated in the “Revelation” category of the TV contest Les Victoires de la Musique. She rapidly becomes a regular on opera and concert stages around the world (Operas of Lyon, Nantes, Metz and Rouen, Opéra Comique, Luxembourg Grand Theater, Châtelet, Cité de la Musique, Lincoln Center in New York, Teatro Comunale of Bologna, Vienna, Festivals of Aix-en-Provence, Beaune, etc.), where she is equally successful in her engagement with the baroque repertory, as she is with contemporary creation or classical and romantic masterpieces.

Then, after performing Minka of Chabrier's Le Roi malgré lui, at the Opéra de Lyon and at the Opéra Comique in Paris, she was heard in L'Amant Jaloux, from Grétry, again at the Opéra Comique, and also at the Opéra Royal of Versailles, with the conductor Jérémie Rhorer. After La Vie Parisienne of Offenbach at the Capitole of Toulouse, staged by Laurent Pelly, she was Thérèse in Les Mamelles de Tiresias, at the Feldkirch Festival and at the Imperial Theater of Compiègne, Fatime in Abu-Hassan by Carl-Maria von Weber in Besancon, Musetta in La Bohème at Saint-Étienne, and Frasquita in Carmen, again in Compiègne. She played again in 2014 one of her first roles, Minette in Offenbach's La Chatte métamorphosée en femme, a new collaboration with Alexandra Lacroix which is still ongoing, with a triptych around the Passions of Bach.

Three CDs with her baroque ensemble RosaSolis have been released since 2009, the first one dedicated to Haendel’s motets and sonatas, the next one to Pergolesi’s cantatas, and the last one, released in September 2017, to a jewel of Boccherini, his Stabat Mater for string quintet and soprano. Magali Léger regularly performs in concert orchestra, as an Haendel tour in Europe with the Concert d'Astrée, or with pianists such as Rémy Cardinale and Marcela Roggeri, in repertories ranging from Chopin to Piazzolla.

She’s been working for several years with the composer and pianist Michaël Levinas who wished to record with her the melodies of Fauré, including La Bonne Chanson. Magali Léger performed Gregor's Sister in 2011, at Lille Opera, in La Métamorphose, Levinas' new opera based on the famous Kafka novel, and participated in April 2017 in the creation of his oratorio, La Passion selon Marc, for the 500 years of the Protestant Reformation.

With the ensemble Les Arts Florissants and its artistic director William Christie, Magali Léger sings Rameau, Maître à danser, a staging performed since 2014, at the Cité de la Musique in Paris, at the Barbican Center in London, at the Bolshoi Theater in Moscow, in September 2017 in Seoul, and in March 2019 at the Brooklyn Academy of Music. It’s also in this concert hall of New York that she came in April 2016 with Les Arts Florissants, to sing in Les Fêtes Vénitiennes, from the French composer André Campra.

She keeps working with Emmanuelle Haïm in October 2017 at the Théâtre des Champs-Élysées for a Mozart Gala, and in May 2018 at the Opéra de Dijon where she sang The Statue in Pygmalion of Rameau, and Psyché in L’Amour et Psyché of Mondonville, staged and choreographed by Robyn Orlin, performed again in January 2019 at the Lille Opera, in February 2020 at the Grand-Théâtre of Luxembourg City and in March 2020 at the Caen Opéra-Théâtre.

In May 2019, she joined Anna Caterina Antonacci at the Grand Théâtre de Genève to participate in the creation of Marc-Antoine Charpentier's Médée, under the direction of Leonardo García Alarcón and his ensemble Cappella Mediterranea, in an extravagant staging by David McVicar.

The year 2020 is not only a series of postponements and cancellations, but the opportunity for Magali Léger to show the diversity of her repertoire: after the revival of Pygmalion and a one-year residency in Le Havre with her baroque music ensemble RosaSolis, she then travels from Purcell’s duets, with Jean-François Lombard and Les Paladins by Jérôme Correas, to Joséphine Baker and Schubert, both with the ensemble Contraste, to resume this year with Mars-2037, a space (!) musical directed by Pierre Guillois, whom she meets again after Weber’s Abu Hassan in Besançon.

This eclecticism is confirmed in 2021, baroque music of course, Couperin, Rameau, Haendel, the continuation of the French tour of March-2037, but also a return to romanticism through the creation with Jean-François Lombard of the ensemble Le Salon, dedicated to 19th century chamber music, and finally an increased presence with the Contraste ensemble, for programs evoking Josephine Baker and the great voices of the musical...